What France Really Thinks Of The UK, Post-Referendum. Brexit has been a hot topic since the early stages of the referendum and has morphed into a huge galactic star that we can see but not reach. We know that it’s there, we know that it sometimes shines and other times fades, however we cannot comprehend all of the star’s characteristics and elements it possesses. This has naturally caused a lot of assumptions and unfortunately no concrete facts have emerged from the negotiations between UK and the EU so far.

As in any negotiation, back and forth exchanges are to be expected as part of a solid democratic process. We speak our minds based on the knowledge that we have as well as the insight provided to us by the government, however the majority of the information we receive is mostly provided by the media. We rarely have solid information of what Brexit truly has in store for us.

Being based in the UK and part of the IFF International group, we – at CIF Research – often have questions regarding Brexit. IFF International’s headquarters are in Frankfurt (Germany) with a large branch in Palermo (Italy) and another in London.
As we continue to work with international clients (including Europe), we anticipate a slight change of perception of the UK.

This project started off with a simple question. We know what we think of Brexit, we know what the general population thinks of Brexit. But what do others think? As a pact of curious cats, we wanted to know. Like with everything else, before asking, we carried out our own research to see if the answer was already available. Unfortunately, this was not the case and and we could not find research related specifically to something like this – up until now. A true challenge.

We decided to go on a journey. With much anticipation, we began imagining ways of finding out what people think about the UK. We had brainstorming sessions and debates in the office kitchen while the first coffee of the day was brewing, but struggled to reach concrete conclusions.

And then finally, we agreed that the answer we were looking for was not among us but rather external. Other countries’ views are important and matter to us and could give us an idea of what other people think of Brexit and the UK. This led to another office debate: which country would be the best fit to get this insight from? Despite leaving the EU, we know that the lands haven’t shifted as much. We all agreed that our closest neighbour was going to be the first country that we would challenge by asking about their opinion towards the UK as a country since the EU referendum.

The country? France! It is worth noting that France is the 2nd largest contributor to the EU followed by the UK as the 3rd. Economically, both countries have a high GDP. We recruited 250 participants ranging from diverse demographics to take part in our mini research.

We decided to treat this as a project and use our in-house tools and resources. Armed with our expertise and knowledge in telephone research, we wanted this to be an ad-hoc telephone study using the CATI (Computer Assisted Telephone Interview) methodology. This proved to be a very effective way of getting in touch with the general population and collecting responses (data) while allowing us to segment the population.

We phrased the questions as:

Since the UK has decided to leave the EU, has your overall opinion of the UK as a country changed positively or negatively?

20 of our interviewers asked the same question to 250 people. The fieldwork was completed in two days.

There were bets in the office about the outcome of this project and excitement to find out the results. Reality struck us when we were hovering over our data manager’s screens, watching as he pulled hundreds of records in the dataset and sliced and diced the data into different dimensions for us.

Our expectations were exceeded. Not because of the result but because people wanted to participate and found the interview interesting. More importantly, they had an opinion they were willing to share. Remember, these respondents live and work in France and their ties to the UK may or may not be directly affected post-referendum.

To kick things off with good news, France’s opinion has not changed towards the UK. This was expected. The interesting details come in where the data clearly shows that regardless of the majority having a no change in opinion, there is also a shift in opinion for France towards the UK post-referendum.

Let’s start with the general population. 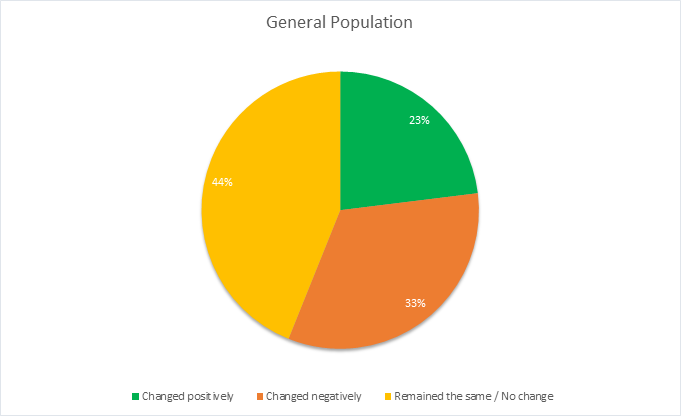 Clearly, the results speak for themselves. However, it is not to be underestimated that a significant portion’s views on the UK have positively changed. It can be assumed (without getting into the politics and taking sides) that like the UK, this can represent a country that is slightly divided about the EU membership. The alternative can also contradict itself with the belief that the shift in views has little to do with Brexit and can be a generic expression towards a neighbouring country.

As researchers, we are naturally curious to understand data further and dig deeper to understand why people answered certain questions.

To find out more, we wanted to split the respondents by their generations for a deeper understanding. What follows provides an interesting perspective about the current situation.

The image below demonstrates the different generations and their birth year band. It offers an insight into their time/era that determines their character/personality/belief.

It is heavily portrayed by the media and believed that a large percentage of the voters for the EU referendum in the UK were Baby Boomers and that a majority of the millennials and other generations did not take part or were outnumbered by the Baby Boomers’ voters. It is possible that if it had been the other way around, the referendum would have never gone through and the UK would remain part of EU. 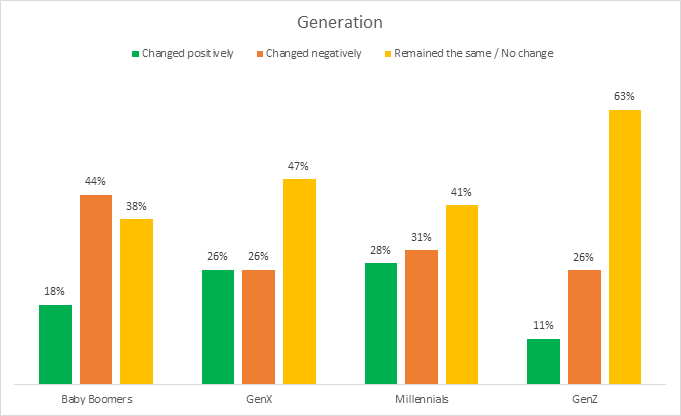 According to the data we collected and the bar chart above, Baby Boomers in France have a negative view towards the UK post-referendum. However, in the UK, the same generation allegedly contains most of the Leave voters. Millennials’ views have shifted to positive in France whilst in the UK it is believed that not many took part in the referendum vote.

Digging deeper into the data, we noticed a subtle climb of positive change from the Baby Boomers to Gen X to Millennials. Naturally, Generation Z have very little to say about the situation. However, with the current trend of opinion shifting to positive we expect Generation Z to also have an impactful outcome in the future.

As we began to analyse this data further, we asked ourselves if the respondents’ answers were linked in any way to their political views. Without asking respondents which party they support, we can draw further conclusions based on their region. 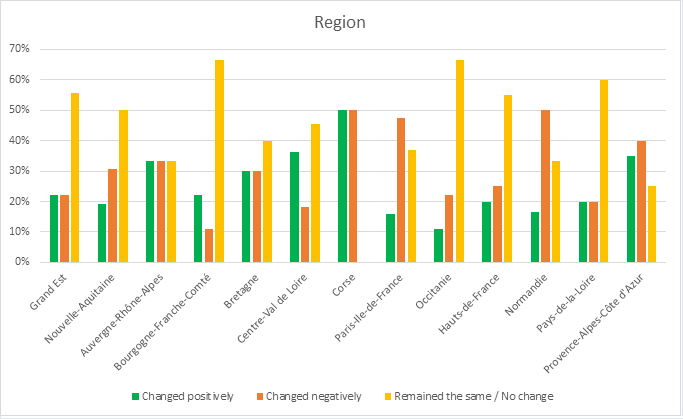 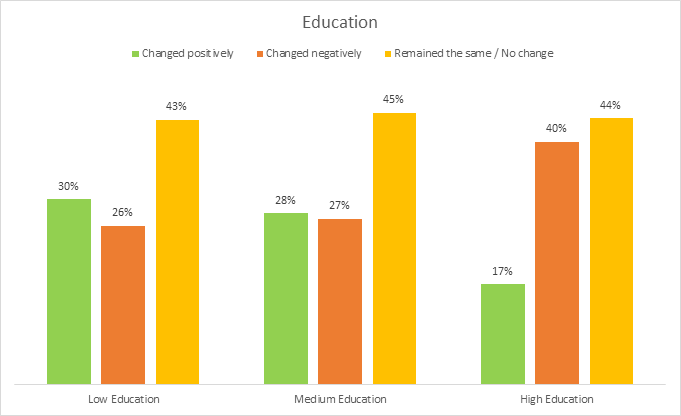 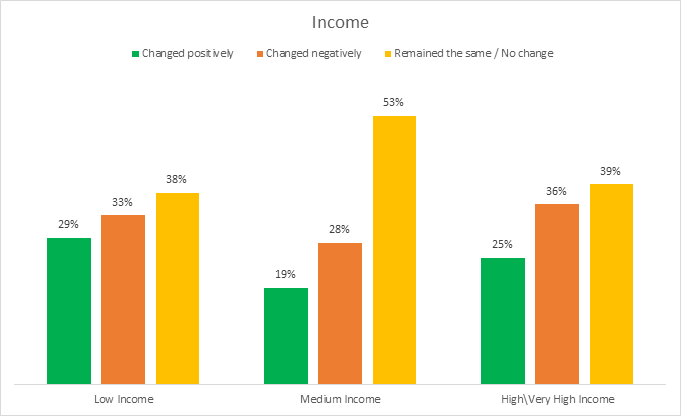 Our findings show that the opinion of the population of France has not changed towards the UK. This is a good thing all around. The split of generations, region, education and income is an example that can be compared with the referendum voters in the UK.

Would the results be the same if we chose another country? Who knows! One thing is certain, a large contributor like France is divided as much (if not more) as the UK on the topic of EU membership.

The decision to leave is respected and the UK is destined to leave the EU but will always remain a European country.

Brexit is now around the corner and we have some insight into what our neighbouring country thinks of the UK after taking the decision to leave the EU. A decision that has divided the country and created a question mark overshadowing the country with no answers (yet).

We remain positive and optimistic about the future. Our relationship with other countries shall prosper and we will continue to collaborate and create strong economic partnerships. For now, the CIF Research team agree that we as people shall remain united and as one, whatever the outcome.

Got A Question? Call Our Team Team On